On June 22, soon after the conflict in Galwan turned deadly, Union power minister R.K. Singh addressed a meeting of CEOs from the renewable and conventional energy sectors. As Union minister in charge of these two areas, Singh made clear to those gathered that there would now be a strong government focus on cutting Chinese imports out of procurement and supply lines. He meant business — the next day, EESL (Energy Efficiency Services Limited, a government power venture) began cancellation proceedings for a contract for two million smart electricity meters from PT Hexing, an Indonesia-based firm believed to be owned by Hexing Electrical of Hangzhou, China. Henceforth, it was announced, all smart meters installed under the Atal Distribution System Improvement Yojana would be made in India. However, based on the same bid, replacing Chinese equipment with Indian made alternatives would increase the cost by about 10 per cent, and even then, some components would come from Japanese factories. This highlights both the reality of global manufacturing and the current limits of the Indian manufacturing sector.

Singh’s ministry has also prepared a list of items used in power transmission and distribution that it says can be replaced with Indian made alternatives. With the government mulling a steep increase in customs duty on Chinese products — perhaps as high as 40 per cent — many domestic alternatives could become financially viable options. In 2019-20, India imported $19.9 billion worth of electrical goods, with an additional $3 billion of solar equipment. “Domestic industry can make most of those products,” says Sunil Misra, director general of the Indian Electrical & Electronics Manufacturers’ Association. “All we need is government support.” On that count, Singh has also written to the finance ministry, asking for a customs duty increase on solar panels and cells — 25 per cent and 15 per cent, respectively, rising to 40 per cent and 30 per cent for the two years after. To promote domestic industry, a two-year ‘safeguard duty’ has already been levied on solar panels from China and Malaysia since July 2018. Though this duty did coincide with a dip in imports — $4.12 billion worth in 2017-18 to $2.59 billion in 2018-19 — other factors also played major roles. In 2017-18, India bought a quarter of all solar modules exported by China. In 2019-20, that figure had fallen to 10 per cent. Moving forward, a ‘basic customs duty’ (BCD) on equipment imports for this sector seems to be in the works to replace the safeguard duty as it expires. 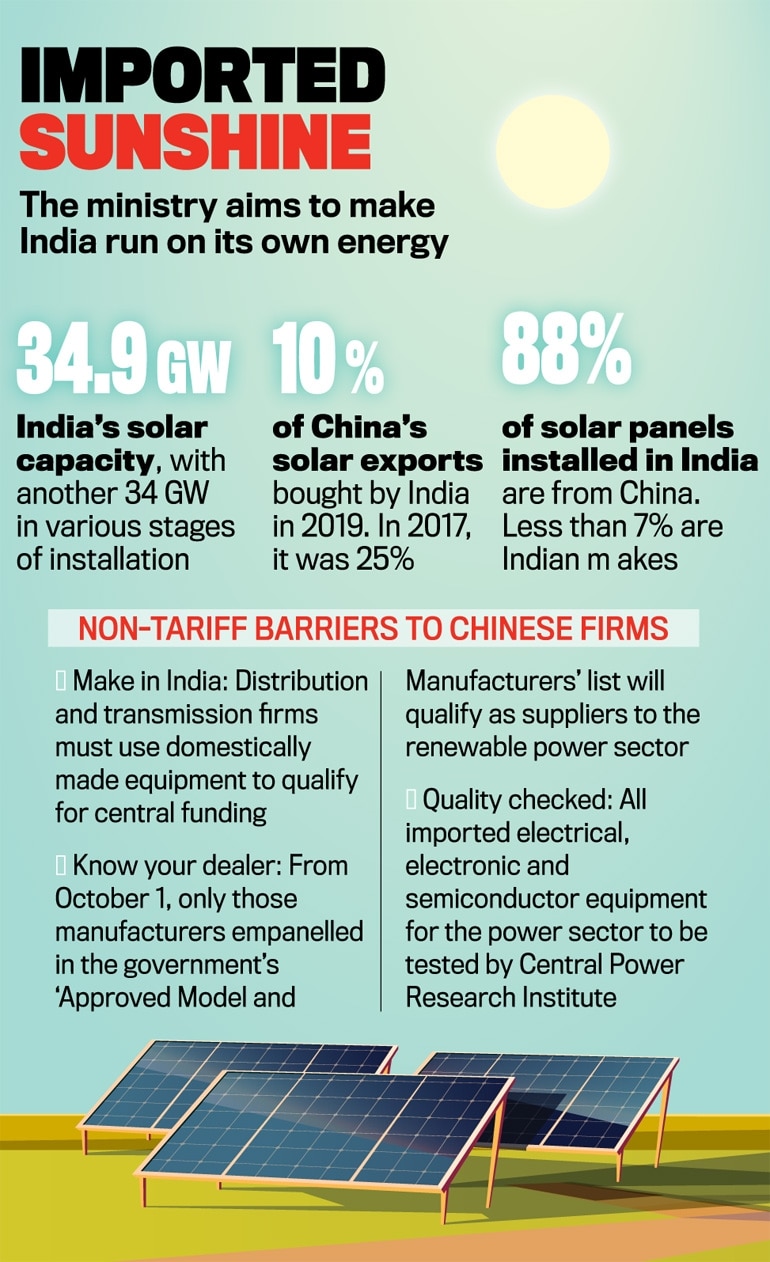 Indian authorities are also raising non-tariff barriers. From October 1, renewable energy firms will have to ensure that their suppliers are government-verified. All manufacturers in this sector will have to be empanelled on an official list, a process that will include site verification visits by officials from the Ministry of New and Renewable Energy. However, this increased regulatory oversight troubles several industry leaders, like Guru Inder Singh Chinna of Amplus Solar and Sumant Sinha of Renew Power, both of whom built their businesses on inexpensive solar equipment from China. Today, Amplus is India’s largest rooftop solar corporation and Renew is India’s largest renewable energy company, the latter with a portfolio of 8 gigawatts (GW) of renewable energy assets either already online or being developed. “To implement these [import] duties, the government will have to do grandfathering,” says Sinha, highlighting the complications of modifying existing contracts. “There are existing projects that are in different stages of implementation, and bids for those projects were made without factoring in these extraordinary circumstances. Also, the current domestic capacity [for solar product production] is not enough for our needs.” By one estimate, of the solar panels installed in India, less than seven per cent are of Indian make, while 88 per cent are from Chinese sources. New regulations also disrupt the mathematics of operators bidding for projects — for example, the BCD is expected to cause an increase in tariffs of at least Rs 0.20-0.30 paise per unit. However, on June 30, Singh clarified to sector CEOs that his letter to the finance ministry recommending BCD had a ‘grandfathering’ clause that exempted operators with existing power purchase agreements from paying it. But many argue this clause is too complex to implement.

This is a pivotal time for the Indian renewable energy market. In 2014, just after taking over the administrative reins of the country, Prime Minister Narendra Modi had stated an ambition of developing 100 GW of solar power production in India by 2022-23. Though progress has been made, domestic solar manufacturers seem to have missed the bus: in the past four years, India bought $13.5 billion of solar equipment from China. Solar operators, however, have reaped the rewards. India’s installed solar power generation capacity zipped from 2.6 MW in 2014-15 to 34.9 GW at the end of May 2020. Tariffs have crashed too, by 80 per cent in some cases. At a Solar Energy Corporation of India-backed project on June 29, the rate was Rs 2.36 per unit. At the same time, domestic solar panel production is in a bad state: India has the capacity to manufacture 8 GW of solar panels and 2.5 GW of solar cells annually; less than half and less than a tenth of those capacities, respectively, are currently in use.

BS webinar on De-risking the Risk Business: ‘Digital road too has potholes’