In January 2018, just after the US started setting up tariff barriers for Chinese goods — leather products among them — traders from the US started flocking to Indian leather clusters in search of alternatives. Not just here, they went to Vietnam and Cambodia too. Those two countries, with FY20 exports of $11.6 billion and $4 billion, respectively, have seen double-digit growth in recent years.

India’s progress has been slow, by comparison. And now, stung by China’s aggression along the LAC, the Union commerce ministry has decided that its target of doubling present exports of $5.1 billion by 2023 be pursued with minimum support from Chinese companies. One option industry has suggested is to look at joint ventures in India with Taiwanese companies, who already have capacities in Vietnam and Bangladesh. But to lure them here, the government will have to clarify FDI regulations for investments from Taiwan. In end-April this year, India tweaked its FDI norms, making government approval necessary for investments from China. To do business with Taiwanese companies, India will have to clarify Taiwan’s political and trade status as an entity distinct from China.

Chinese footwear makes up 68 per cent of imported footwear sold in India, and was worth $470 million in FY20. India too exported footwear to China — worth $40 million — besides skins and hides worth $28 million. Saddlery and handbag imports from China are worth another $428 million. Of the $900 million worth of imports by India of leather and other components from various countries in 2019-20, China accounted for roughly 70 per cent. The balance of trade is manifestly lopsided, which the government now wants to fix. 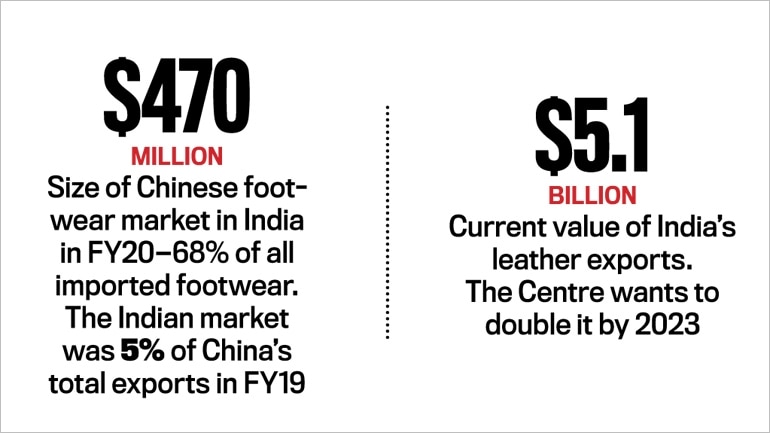 Budget 2020 had already upped customs duty on leather products from 25 to 35 per cent. Leather manufacturers now want the Piyush Goyal-led commerce ministry to levy a dumping duty on Chinese footwear, and hike import duty on chemicals like chrome sulphate and sodium sulphate, used to treat leather. There is an import duty of 8.2 per cent on chemicals, which the ministry might hike to 35 per cent. India is also raising non-tariff barriers, such as blocking Chinese apps like AliExpress, Clubfactory and Shein, to stop the flood of cheap Chinese goods.

Domestic industry is pushing hard for urgent interventions to break the Chinese hold on the Indian market. In the past five years, Indian leather markets have seen a flood of finished products from China, including raw material exported to China returning as finished goods. India’s per capita consumption of footwear has increased from 1.7 to 2 pairs a year, and the availability of cheap Chinese footwear has stoked this demand. China manufactures 13.1 billion pairs of footwear, but its domestic consumption is only 4.1 billion pairs. With the US market slipping away, India is of great interest to China as an export market.

So, access to its market is a lever at India’s disposal against China. But duty hikes alone will not do the trick, says Rafeeque M. Ahmed, president of the All India Skin and Hide Tanners and Merchants Association. To promote domestic industry, the focus, he says, should be on developing an entire manufacturing ecosystem like China’s. Aqeel Ahmed Panaruna, chairman, Council of Leather Exports, wants India to set up mega parks on the lines of Chinese ‘shoe city’ Quanzhou, with design centres, testing labs et al.

India might do without China, but to do so without impoverishing consumer choice at home will require more than belligerent anti-China rhetoric; it will take a concerted strategy including incentives for industry.

BS webinar on De-risking the Risk Business: ‘Digital road too has potholes’